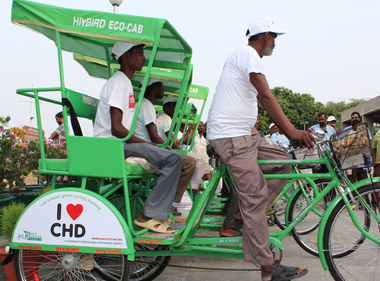 Rickshaws were first seen in India in 1900’s and have gained significant popularity since then. Today, cycle-rickshaws form an integral mode of transport in our cities and can be seen plying in almost each and every city in India. They have become a preferred mode of travel in our cities, especially for shorter distances. It works on pedal power and can carry upto two passengers at a time. Cycle rickshaws not only serve as an affordable means of travel but also has various other environmental benefits related to its use. Its compact and flexible design allows it to comfortably pass through narrow lanes where generally other public transport modes find it difficult to reach. With advent in technologies, a step has been taken to promote this already existing sustainable mode of transportation – 'cycle rickshaws'.

Ecocabs were, therefore, conceptualized and introduced so as to strengthen the existing unorganized network of cycle rickshaws and to promote it as an affordable means of sustainable urban transport especially for shorter distances. An attempt has been made to improvise the various aspects of the entire cycle rickshaw industry including accessibility issues, quality of service, welfare of associated traction men, rickshaw itself and the society at large.

An "Ecocab" is basically a dial-a- rickshaw service developed on similar lines as a dial-a-cab service. The main idea is to bridge the gap between demand and supply through equal distribution of fleet and automation using latest IT tools and real time technologies. The concept was first time launched in the world at Fazilka, a small town in the state of Punjab near India Pakistan Border.

How will this Dial-a-Rickshaw, community based initiative work and how can I contribute to it?

It's a community based initiative working on the concept of ‘by the people’ and ‘for the people’. Whenever you are travelling on a cycle rickshaw, or in case you know any cycle rickshaw operator working in your neighborhood or sector, you can refer him for the dial a rickshaw facility simply by using your Android based Smart Phone application or direct web application. Just click the rickshaw operator’s picture and submit it to us along with his phone number and name under the particular sector of operation and name of the rickshaw stand, where this operator generally parks his rickshaw during free time. After basic verification of the referred rickshaw walla, our administrator will post it to the server. The details of the rickshaw operator would then be available to the general public under the dial-a-rickshaw facility.
Check our illustartion based "How it works" guide

How will this help cycle-rickshaw operators?

Dial-a-rickshaw service will help in reducing the number of empty trips on the part of the operator and hence, improve the overall efficiency of the system. It has been observed that 1 to 2 calls per day increase the income of a rickshaw operator by 25-30%. This substantial increase in income can help him improve his living standards and afford a better quality of life. Further, he doesn’t need to stand at a particular place and wait for customers; he can now park his rickshaw anywhere in parking or open areas and move to his client only after a phone call of customer. This will help in reducing the traffic burden on roads.

What is the benefit of rickshaw to the environment, and how Ecocabs are helping to maintain that?

A single rickshaw travel about 40-50 km in a day. When compared to a car of average mileage 15km/liter, Ecocab can help in saving upto 3 litres of fuel daily and its related emissions. Also, burning of one liter of fuel requires 15.2 kg of fresh air. Therefore, other than exhaust gases, Ecocab also helps in saving 45.6 kg of fresh air per rickshaw on a daily basis. Informally operating in every nook and corner of our cities, Ecocabs have added a new dimension to the existing transport systems especially in terms of first and last mile connectivity. This modified form of rickshaw operations can help to maintain and enhance its demand and reverse the declining trend of rickshaw operations observed in the recent past.

When were Ecocabs first launched in the world?

Ecocabs were first launched in the world on 20th June 2008 in Fazilka, a small town in Punjab located near the India Pakistan border. It was then that cycle rickshaws were made available to the common public for the first time via a phone and a network of call centers.